Who's That Doggy On The (Original) Label? 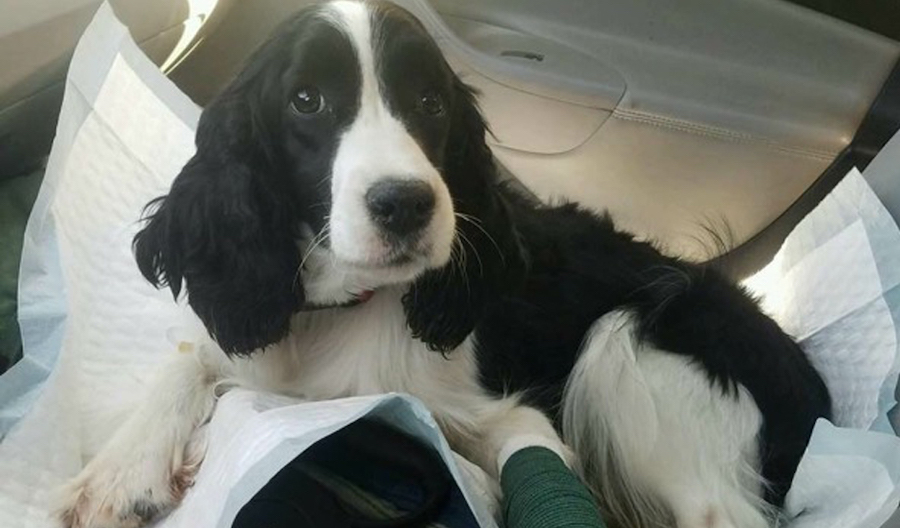 People always laugh when I tell them that Sophie came to us by Uber. But it's true...

People always laugh when I tell them that Sophie came to us by Uber. But it's true, the traffic was so horrible in Los Angeles the day we were to pick her up, it would have taken 5 hours, according to Wayz, for the round trip only 46 miles away. 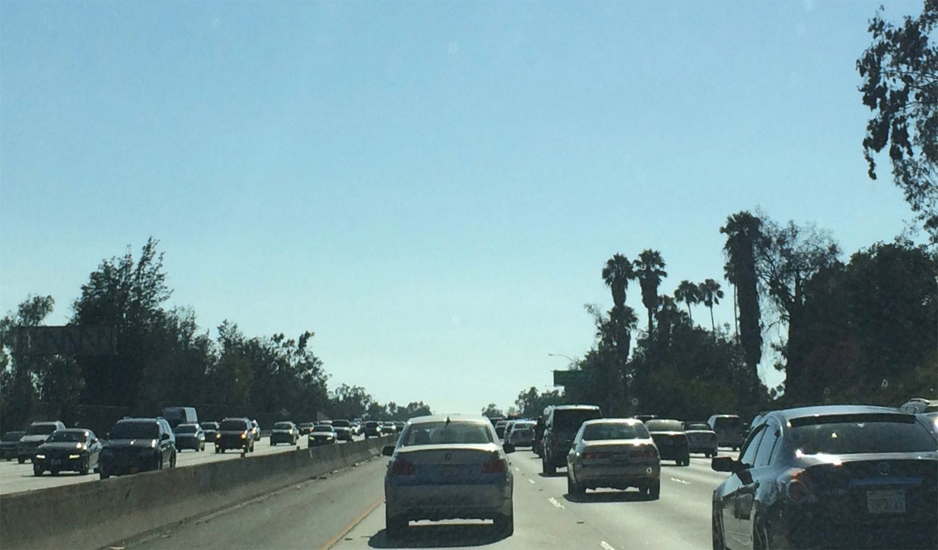 And we desperately needed those hours to finish packing up our home of 34 years in Santa Monica, California that we had just put on the market. We couldn’t wait to hit the road back to our new home in Santa Fe, New Mexico. 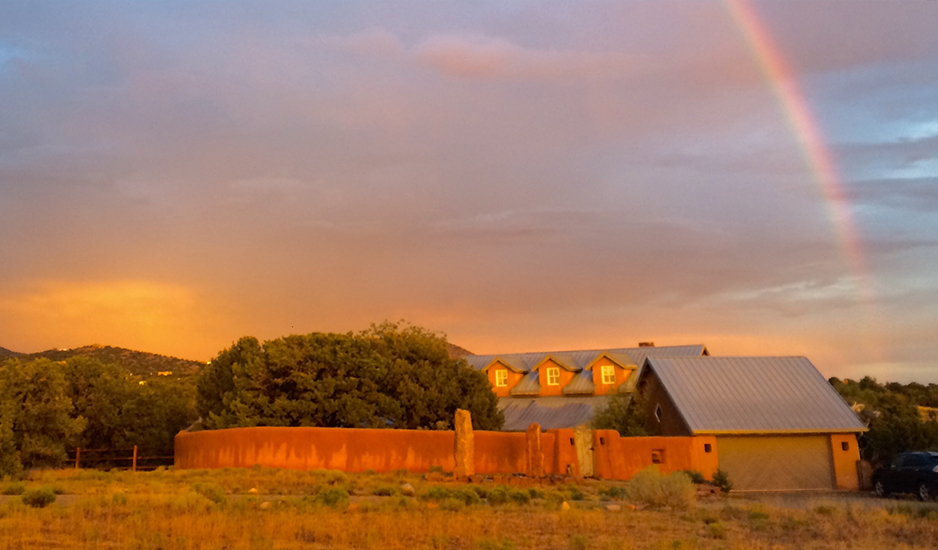 Let me back up a bit and explain. My wife Helen and I have had Springer Spaniels in our lives since 1984. We’ve especially enjoyed having two dogs at a time. Our condo in Santa Monica was just a few blocks away from our local dog park and, with very active dogs, we visited it twice a day. Our new home in Santa Fe is on seven acres and, after years of sharing a two acre park with 40 other dogs, it felt almost selfish for two dogs to enjoy such an expanse by themselves. “We need another dog” Helen 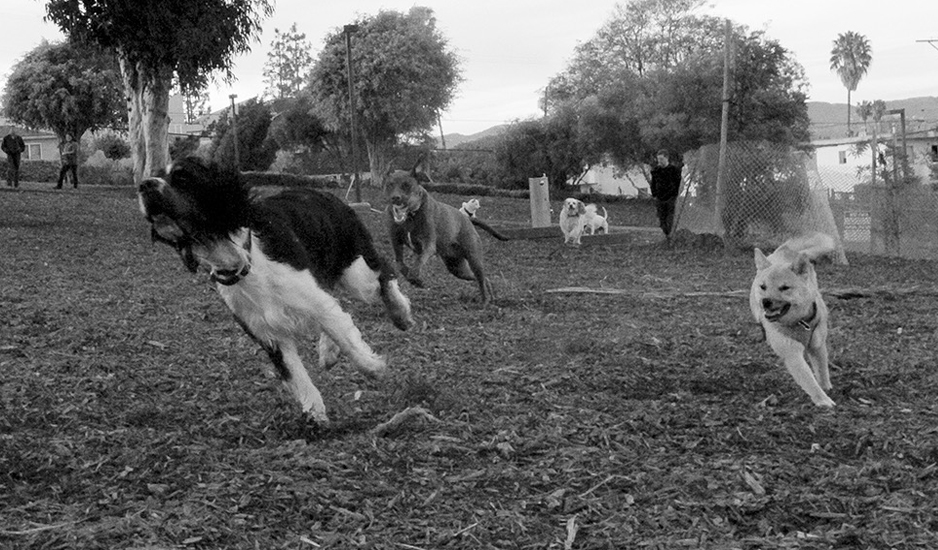 announced. “Hudson [our latest rescued Springer Spaniel, then four years old] needs a little two year old girl to run around with.” Our other dog, Oliver, was more of a lap dog and not into sharing much more with his high energy brother than a cookie. We contacted our friends at ESRA (English Springer Rescue America) where we have adopted most of our dogs from, and told them exactly that. Amazingly, Carolyn replied, "We had a picnic last week and one of our volunteers asked us to help her rehome her exceptionally small but beautiful two year old black and white female Springer." Despite some reservations about her small stature, we knew she was meant to be ours. We arragnged to pick her up in Anaheim before we returned to Santa Fe on our already scheduled trip to California.

Back in Santa Monica, we got the call to pick her up on a Saturday, the day before we were heading back to Santa Fe. We had been away long enough to forget how horrific the traffic was in Los Angeles. Twenty-five minutes later, we were still in Santa Monica crawling along at 5 miles an hour.

We got off the freeway and, as we had the two boys with us, took them to the nearest dog park and tried to think through our dilemma. Sophie’s owner had to work the rest of the weekend and basically today was our only chance to pick her up. We called her and reaffirmed that we wanted Sophie but just couldn't see how we could get there and back and still finish packing up the house by the next morning. Helen half jokingly said that the only way we could get her that day was to Uber her. Amazingly, her owner said, “Hmmm, one of the volunteers at the shelter is an Uber driver and perhaps she would be willing to make the trip.” Judy was available and Sophie was delivered by Prius at 7 pm that evening. 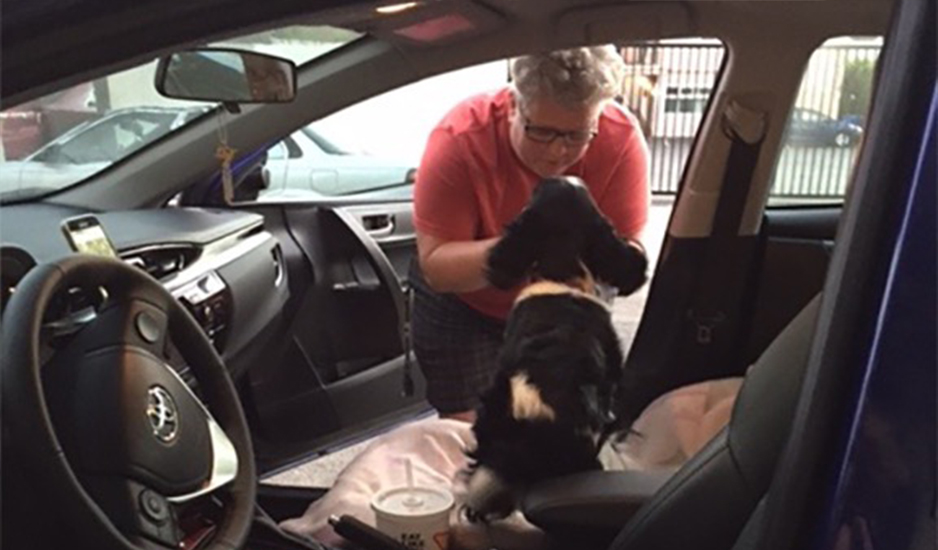 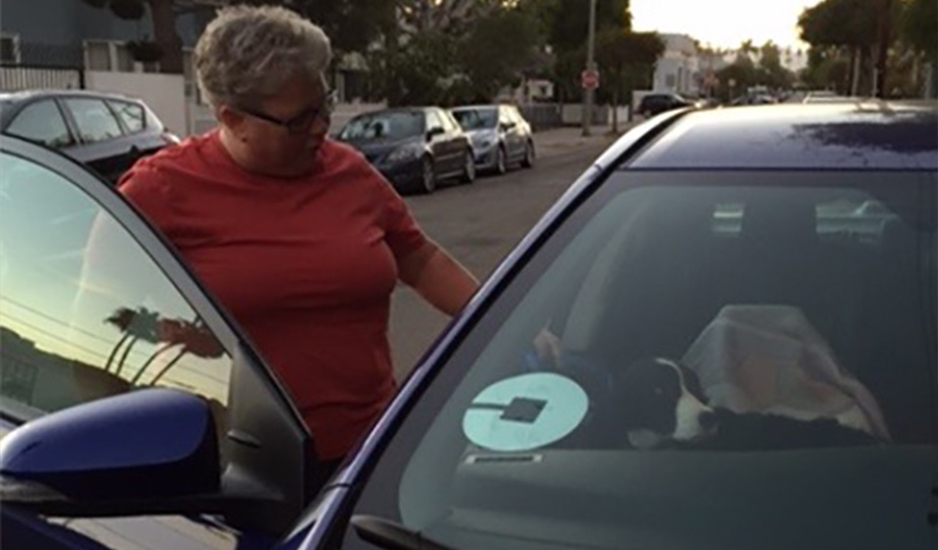 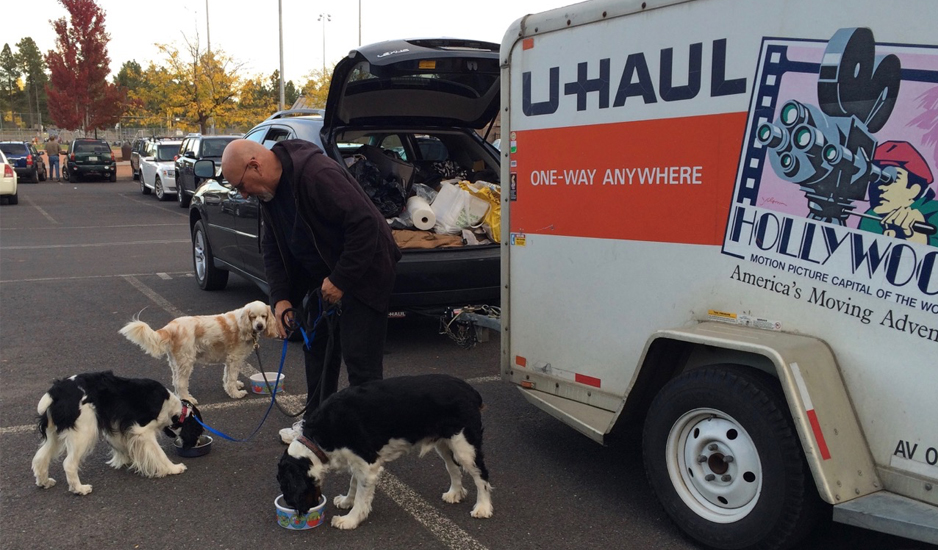 The next morning we made a space for our new little dog in the well behind the driver’s seat, where our last female Springer loved to curl up, and we drove back to Santa Fe with all three dogs and a U-Haul in tow. Sophie was great in the car and, as expected, the new Springer couple hit it off and played and cuddled together. 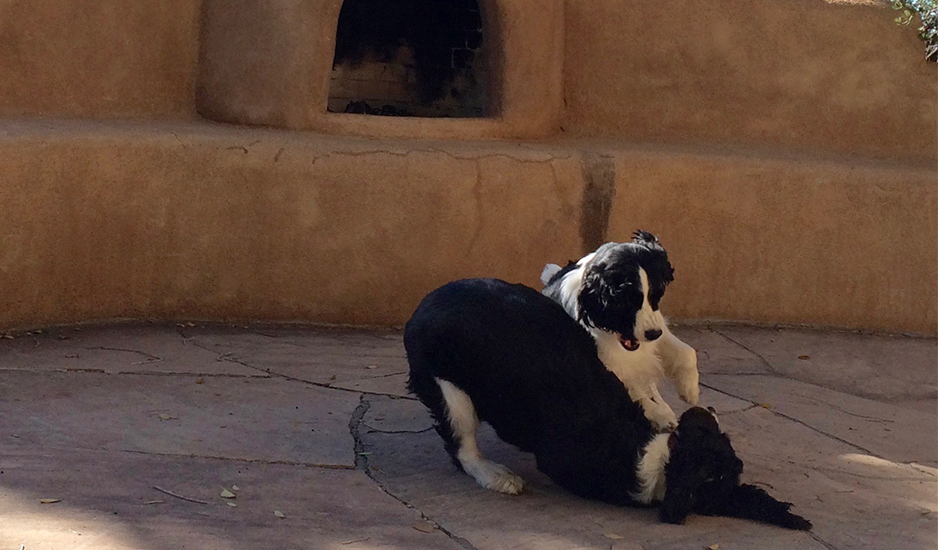 Three weeks later our condo had sold and we needed to return to CA to close escrow. The condo had been staged with over 50 pieces of Helen’s art which we needed to bring back to Santa Fe with us. We didn’t want to bring the dogs this time as it would be a very hectic trip and not a lot of fun for them. We hadn’t found a house sitter yet, and Helen remembered hearing about a new company that was basically an airbnb for dogs.

We found a lovely woman with a small house with an acre fenced yard and brought all three of the dogs over and spent an hour with her to check things out. She was mature and intelligent and had an arroyo behind her house where she would hike with the dogs on a daily basis. We contracted to leave our pack with her before we took off back to Santa Monica one last time. 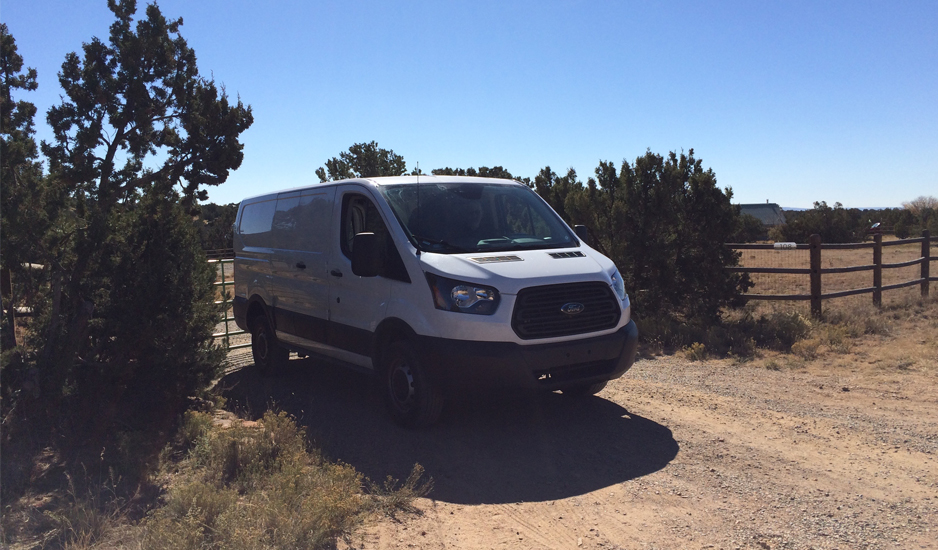 that we rented in Santa Fe. Helen’s phone rang as we neared Gallup, NM (about three hours into the trip) and it was our dog sitter. We could hardly make out what she was saying as the empty cargo van acted like an echo chamber and we had to pull off the road. “What do you mean you can’t find Sophie?” She had just returned from taking the dogs for a hike and, as instructed, kept Sophie on leash, two in fact, so she would be secure on a longer lead. She explained that Sophie had run out through the gate and took off, leashes still attached,when a small boy stopped by with his mom and left it open. The sitter had been looking for her every since, riding her mountain bike, retracing their hike.

For the next few hours, each time the phone would ring, we would pull off the road so we could hear the sitter’s report - still no Sophie. We were besides ourselves. Did the coyotes get her? Is she trapped by the leashes getting caught in a cactus or tree? Was she stolen from the parking lot that was adjacent to the house? She was small and adorable after all. We couldn’t turn around as we had our deadline in LA. If she had called immediately we would have headed back, but this was too many hours later.

It was seven hours after she escaped, the sun started to set and we were losing hope. Then Helen’s phone rang and a different voice was on the other end. “Hi, we found your Sophie.” Her name and Helen’s phone number were on her tag. We were 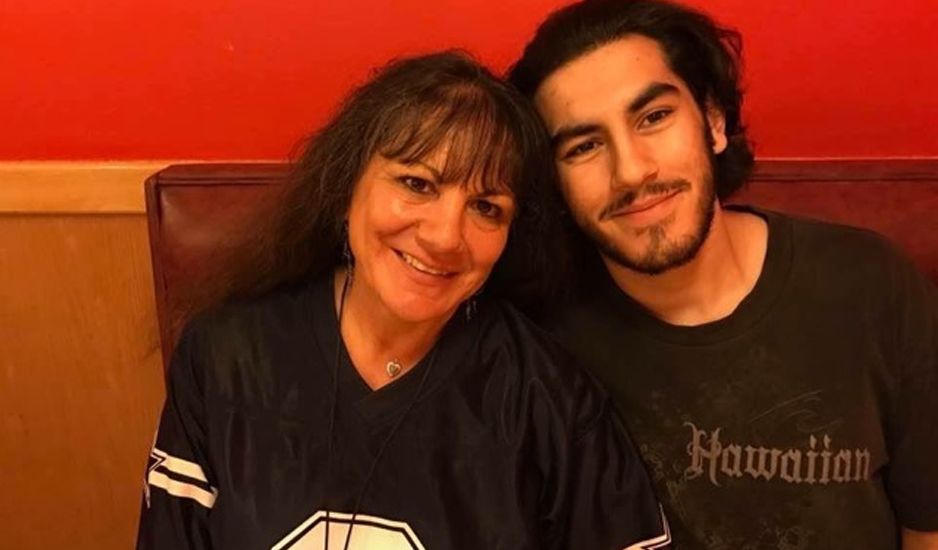 ecstatic. “But,” she continued, “she is badly injured.” Our hearts sank. “I saw her running along the road so we stopped and my son tried to catch her. But she wouldn't come and she was run over by a car. He was almost hit too as he tried to wave the car off, and had to jump out of the way. He scooped her up and brought her to me. I made a tourniquet with my scarf to stop the bleeding. What should I do? Can you come and get her? Helen explained the situation. They were in a parking lot a few miles away from the dog sitter’s house. She called the sitter who sprang into action again after a very exhausting day. 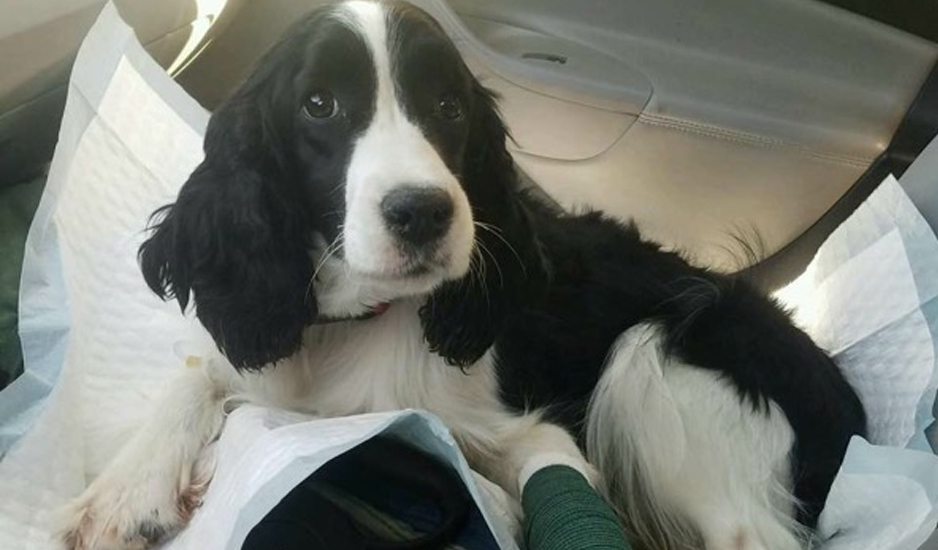 The sitter took her to the emergency veterinary hospital in SantaFe. They were able to stabilize her but her injuries were so extensive and severe that she would need to be transferred to a speciality surgical center in Albuquerque the next morning. Sophie’s pelvis was broken, her hip displaced and her left front leg was, for lack of a better word, mangled. We arrived in Los Angeles, packed and left as fast as possible to head back to New Mexico. 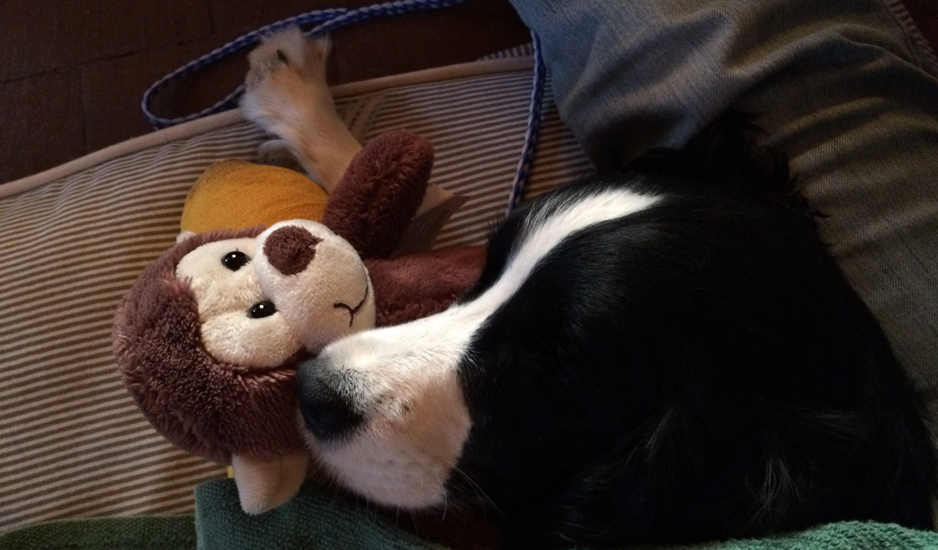 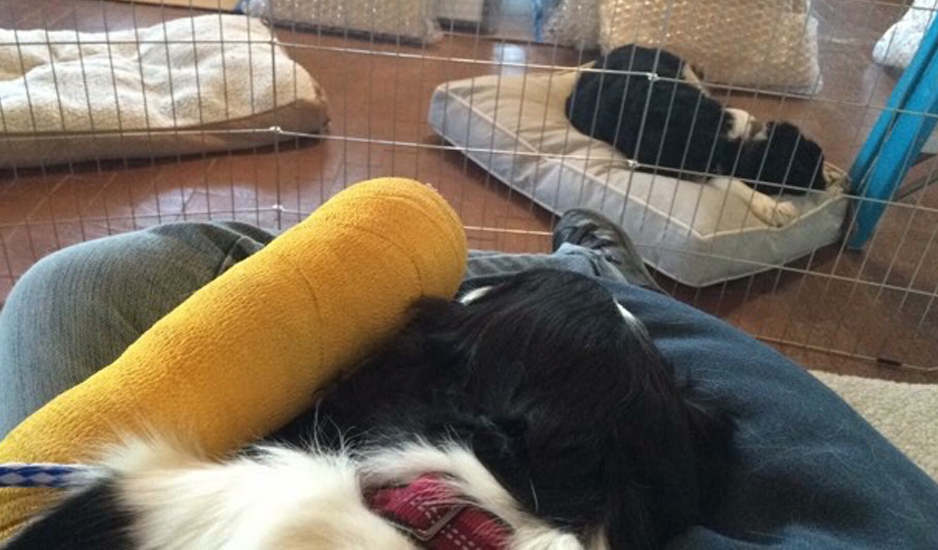 They sat us down and explained what it would take for our new young dog to recover from the traumatic injuries and we were stunned at the commitment we would need to make after we arrived at the hospital. She couldn’t walk without assistance, she had to be separated from the other two dogs and it would take multiple surgeries and physical therapy and probably a year for a full recovery. 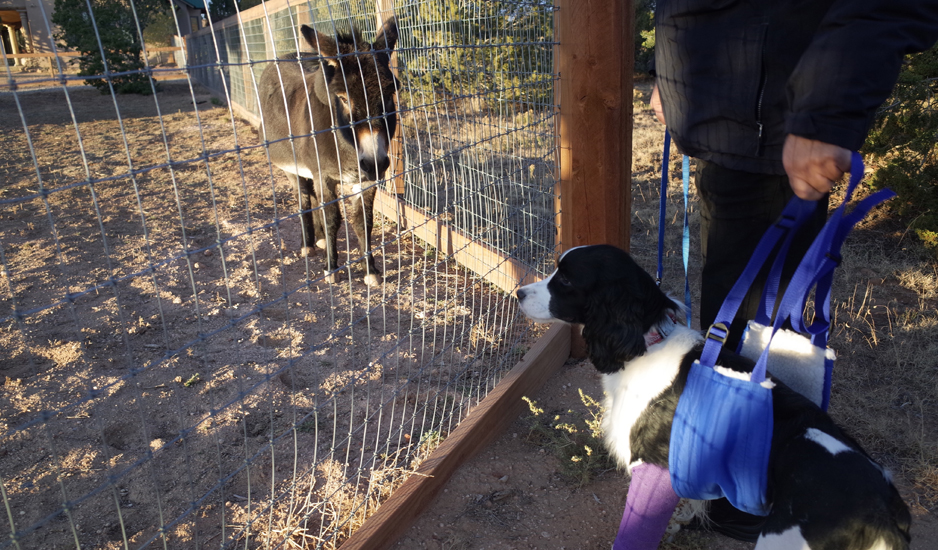 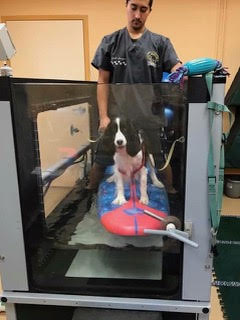 We devoted many, many hours to helping her heal. Nine months later, Sophie was discharged from the surgeon’s care and we were finally able to fully concentrate on bringing the Maxwell Pet line to market which had been put on hold while we helped Sophie with her recovery. 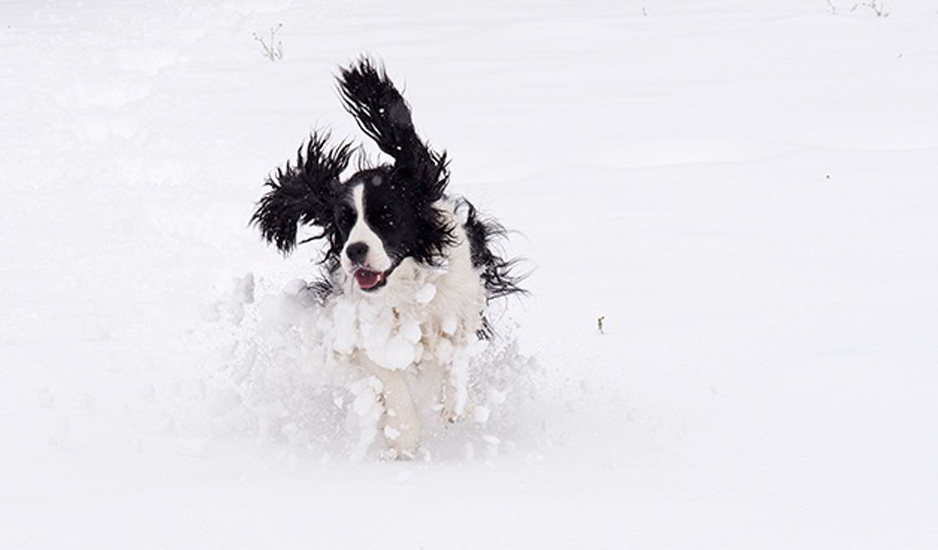 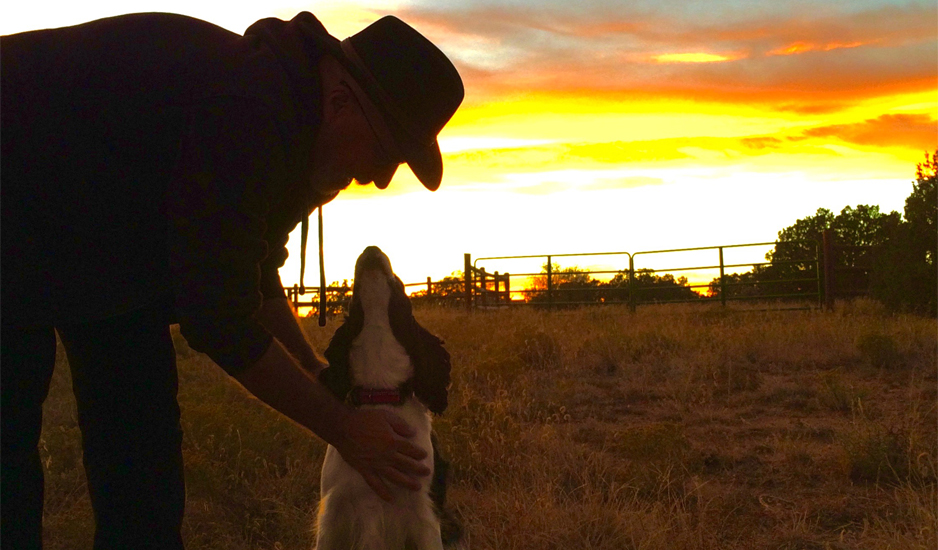 The name MaxWell Pet came from our favorite hiking trail in Idyllwild, CA, The Ernie Maxwell Scenic Traill, where many of our past Springers enjoyed the two hour run. It occurred to me that Maxwell could be short for maximum wellness. Maximum Wellness Pet Products became MaxWell Pet and we knew we had chosen the perfect name.

Our marketing consultants suggested that the MaxWell Pet label should reflect our product line for humans, Dr. Garber’s Natural Solutions. An illustration made from my portrait is featured on those labels, so it was just a matter of deciding which dog’s portrait would replace mine for the MaxWell Pet label. 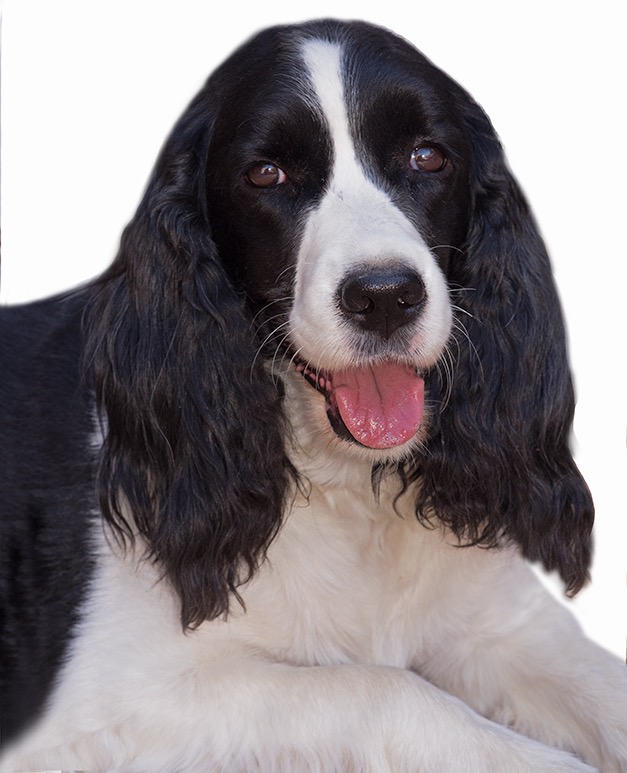 Since Helen is a professional photographer there were a lot of existing images to choose from. But after all we had just gone through with Sophie, and the fact that she is so irresistible, it had to be her. Helen pulled out her camera and soon had the portrait of Sophie that would become the face of Maxwell Pet.